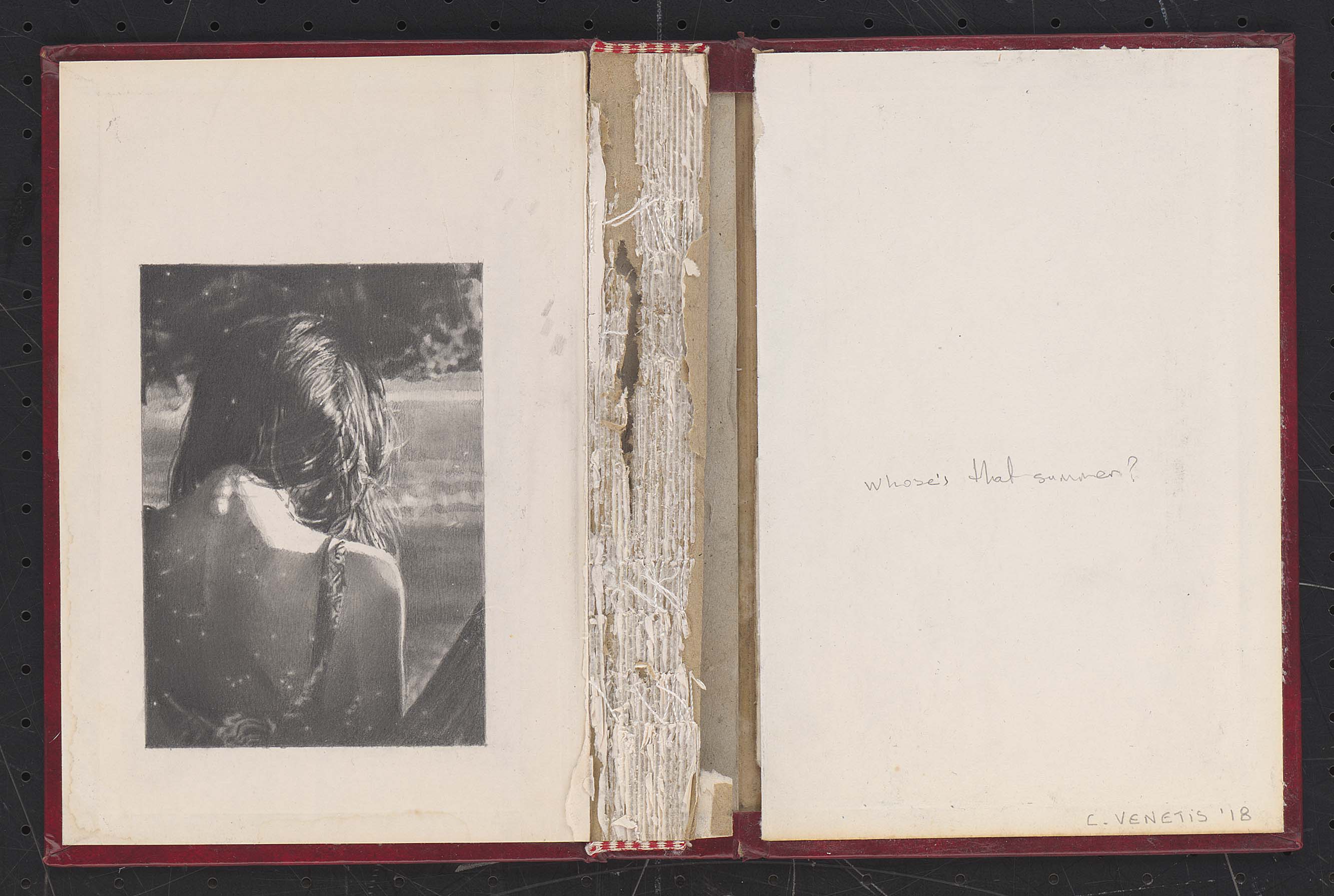 Once you feel the lure of drawing it is difficult to escape. Drawings are the foundation in arts, every sketch can illustrate majestic illusions, every phantasy is lifted and every thought is materialized. Drawing shows everything, it shows the approach the artist has, his ideas and his/her concepts. Being relatively affordable, it is currently an exciting field for artists as it is for those who collect these works. Although I already added works of Christos Venetis to the collection in early February 2018, he continues to be highly productive and I was able to pick another 5 new works. Christos has not changed the general approach for the series “Anaemic Archives”, all works continue to be pencil on book covers, 21 x 31,5 cm. I believe it is fair to say that he is not only diligently following his calling to draw but he is also very gifted, this is on side his formal quality and further the idea he expresses which will likely be always interesting. Painters like Marius Bercea or Adrian Ghenie have also dealt with the confusion between consciousness and memorization, but in case of Christos Black/White colouring there is heavy precision in the way he finely grounds the works. Some appear to have a sharp view, others appear to have blurred and are about to about to be last to recall. Again field depth and overexposure are used which is certainly not easy to be achieved. Collecting the work therefore is not judging the quality of the piece but rather choosing the motives which becomes a highly subjective choice. It resembles the act which you do when choosing photos of important moments that you have taken casually. You sometimes choose it because the image is aesthetically so compelling, a “well shot” photgraphy. Others are more important because of what they document. Naturally this goes beyond of what it is, it sometimes is illustrative for a biography, for a political development or something poetic. Ernst Gombrich in “The History of Art” once made the difference clear that anything can be aesthetically convincing and beautiful, not only a “beautiful thing”, but also seeing something you would superficially only say is cruel or horrible. A dead pig on a meat hook seems to be drastic at first, the light incidence in it also shows the beauty of nature that is not lost when life is lost.

This time I have deliberately chosen works that are not heavy to swallow, the scenes are lighter and do not enforce the viewer to swallow so much. Nevertheless details like the barbed wire contain their potential to hurt you, the wire mesh of an old fence eliminates freedom as it may offer protection at the same time. The rail road track Christos called “Europe” contains what the european political project has stood for such a long time: The way ahead, not the nightmares of the past. Combining the wire mesh with the railroad track “Europe” could quickly call for the refugee debate to be in the focus, which is obviously the joy for a talkative person to illustrate his topics through the means of combined images.

The older work from 2014 of two women sitting on a couch is saying a lot while saying nothing at all. We can only imagine what the overall state of these two women is, it is just a moment in time. While the long haired woman on the left appears to be animate and sanguine, laughing and enjoying the moment, the short haired on the right appears to be lost, she is elsewhere, she is not present in the moment but follows her thoughts, she may be melancholic or deeply satisfied, this is unclear. Maybe the message that she heard through the phone was so overwhelming that she could yet not fully grasp what was going on. Was life treating her well or is the person on the left living an easier life? All this stays with the viewer to decide, there are no answers provided but we may all be touched that despite we can be close and connected, our lives may be on a completely different road, some enjoying their best days while others may have to struggle through darker ones.

“Anemic Archives” drawing series is showing real and imaginary scenes, reminiscent of a black and white photo album or a silent documentary film. Less linear, associative and subconscious strands of narrative emerge, the seemingly nostalgic ensemble of images develop a haunting if not subversive and painful undertone while settling in our mind. As other artists today Christos uses books as the base material for his works which must be seen in our times as a statement towards the relevance of books which is clearly relenting while digital images are on the rise. Christos said in an interview to FUCKT magazine in 2016: “This series of drawings could be titled Liber Mundi / Imago Mundi. The term “Liber mundi” (the world as a book) suggests the idea of wholeness or, at least, the desire, the craving for wholeness. It is a medieval idea that continued with the Enlightenment Encyclopedia and the full use of written speech. However, it is a known fact that our time is defined by the domination of the image. It is a whole comprised of fragments of two different communication systems.” A work of Christos can be viewed isolated from others, however several images always quickly create a narration, an alternative story completed by the viewer.

Note: All works by Christos Venetis do not carry a title, the names or descriptions above are just used to better identify the work besides its catalogue number.