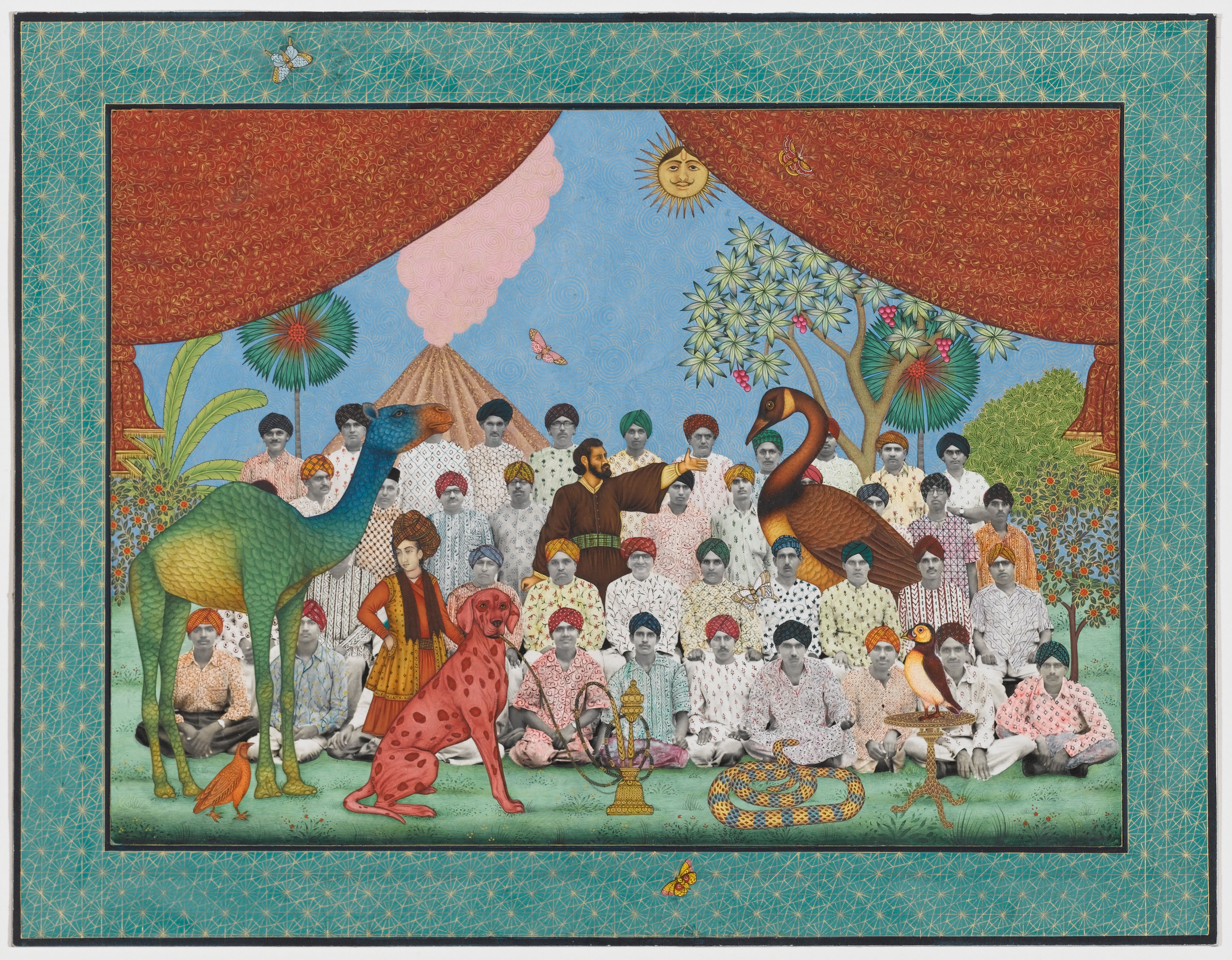 “There’s a common assumption that the “miniature” in Indian miniature paintings refers to the size of the artwork. While they were most commonly hand-held manuscripts to be lingered over in close proximity rather than viewed on a wall, some of the paintings were quite large and the diminutive refers to the artists’ brushes, the finest of which are tipped with a single squirrel hair.

It’s mesmerizing to watch a master miniature painter at work. The quiet, intense focus, the occasional barely perceptible holding of the artist’s breath, as if the slightest exhalation might interfere with the hand muscles and distort the lines (which are indeed breath-taking in their delicacy). In this tradition, concentration is everything: the painting is either perfect or it’s wrong.

The painter’s language is revealing. You need “soft hands” to achieve such tender subtlety but “force” too because it demonstrates the clarity of vision, an unwavering steady hand, and clear intent. This is true even when painting a leaf in the margin but particularly so when applying the “cut” or the outline that delineates the face, which is the ultimate test for the master painter.

If softness, delicacy, force and concentration are essential qualities in the making of a miniature painting (or the finest lace, wood carving or silver filigree work for that matter) they also play a part in how we look at them. In slow, careful looking, you feel the eye as a muscle focusing in on the infinitesimal details and tracking patterns where they exist. An intense relationship develops in the intimate space between the object and the viewer. It’s the same distance and a similar connection that earlier existed between the object and the artist and this forms an empathy and kinship between the maker and the viewer. (…)

To begin, why do we equate size with power? Are mass, volume and weight always implicitly associated with strength or fragility? Public sculptures celebrating national pride, military conquests or heroic achievements rely on scale to capture public attention, to be seen by more people and from a greater distance. Giant artworks outside financial institutions or in corporate lobbies imply largesse in relation to wealth, value, and status. Cathedrals were built to subsume us, to remind the congregation of our own insignificance in relation to the almighty. In these contexts, size is equated with a form of power that’s used to impress, possess, dominate and even oppress. Power exists because it’s held over another.

The notion of power is still however essentially symbolic or metaphorical, rooted in concepts of the dominant belief system. There are of course alternative forms of power. The magic powers of a talisman worn in a pouch round the neck, a lucky charm kept in
one’s pocket, or a cherished photograph; all these may be profoundly powerful objects for the individual. Edward Snowden’s thumb-drive that held thousands of NSA documents can signify the fundamental change in how we perceive the State. The image of a single bullet has enormous symbolic power, as does a diamond wedding ring.

While these objects may be viewed as having innate qualities, we choose to invest them with our ideas of power and relevance, but this is equally true of whatever qualities we project onto a gigantic Richard Serra sculpture. It’s just stuff.”

Alexander Gorlizkis own words in the introduction to “A Concentration of Power”, group show curated by Alex Gorlizki in London, Joost van Bergh (Decembre 2018-January 2019).

“Alexander Gorlizki’s immersion in the world of Indian Miniature paintings over the past 15 years has yielded an eclectic body of work, often with startling results. Fascinated by the forms, sensibility and techniques of Mughal miniatures, Gorlizki has sought to incorporate his own visual language into the 600-year-old tradition with a subversive reverence.

In 1994 he established a studio in Jaipur’s old city with Riyaz Uddin, a master miniaturist painter. Having spent over a decade copying traditional miniature paintings for the local tourist market, Uddin had developed a mastery of the technique, rendering infinitesimal details with absolute precision.

Gorlizki conceptualizes and draws out the iconography, patterns, compositions and colour schemes onto antique or distressed papers and photographs. Uddin then applies jewel-coloured pigments and gold leaf with a single-hair-tipped brush to create works of breathtaking intricacy. Working side by side in the studio or shipping images back and forth between New York and Jaipur, the paintings evolve layer by layer, often over a period of years.

In that time the studio has developed into an atelier in which up to nine artists with different areas of expertise work on the paintings, often passing the work from hand to hand. Gorlizki believes that working in collaboration leads to a rich dialogue yielding unexpected results, while at the same time exposing the participants to a wealth of specialized skills and knowledge. The trans-global collaboration represents a cross-fertilization that is as valuable as the finished work of art. […]

The works can be sensually compelling and simultaneously awkward and unnerving. Whilst some paintings are embedded with irony and humour, others vacillate between the mythical and banal, the mysterious and the everyday. The results are idiosyncratic gems that shine and glow.”  Joost van den Bergh