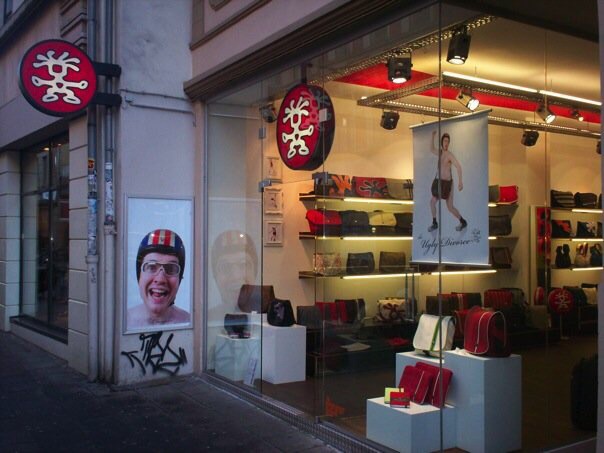 In 2008 while in Saigon (Ho-Chi-Minh-City), I was asked to do the so called “Nudex”, which was a series of poses requiring a nude body model to illustrate the real size of a bag, so people can order it from a catalogue. That was done before with Rasta guys, Kung-Fu Girls, etc., now I was the Nudex. However, the role model was later called Arnold and somehow evolved into the brand hero of that season for Crumpler “Crumpler makes you sexy”. I was featured in stores across Europe, wearing a too small helmet and a leopard skinned panty. My initial reaction was: “Don’t you wanna sell more bags?” Joerg, one of the owners, responded: “Did you have your 15 Minutes of Fame yet? You are clearly our target group.” The Campaign “Crumpler makes you sexy” was later scrapped, the brand evolved rather into a conformist non-conformist brand, so the target group of urban and bearded skinny jobs who ride monocycles and have no humor was featured, since being a non-conformist conformist is such a serious mission and Arnold could not help with that.