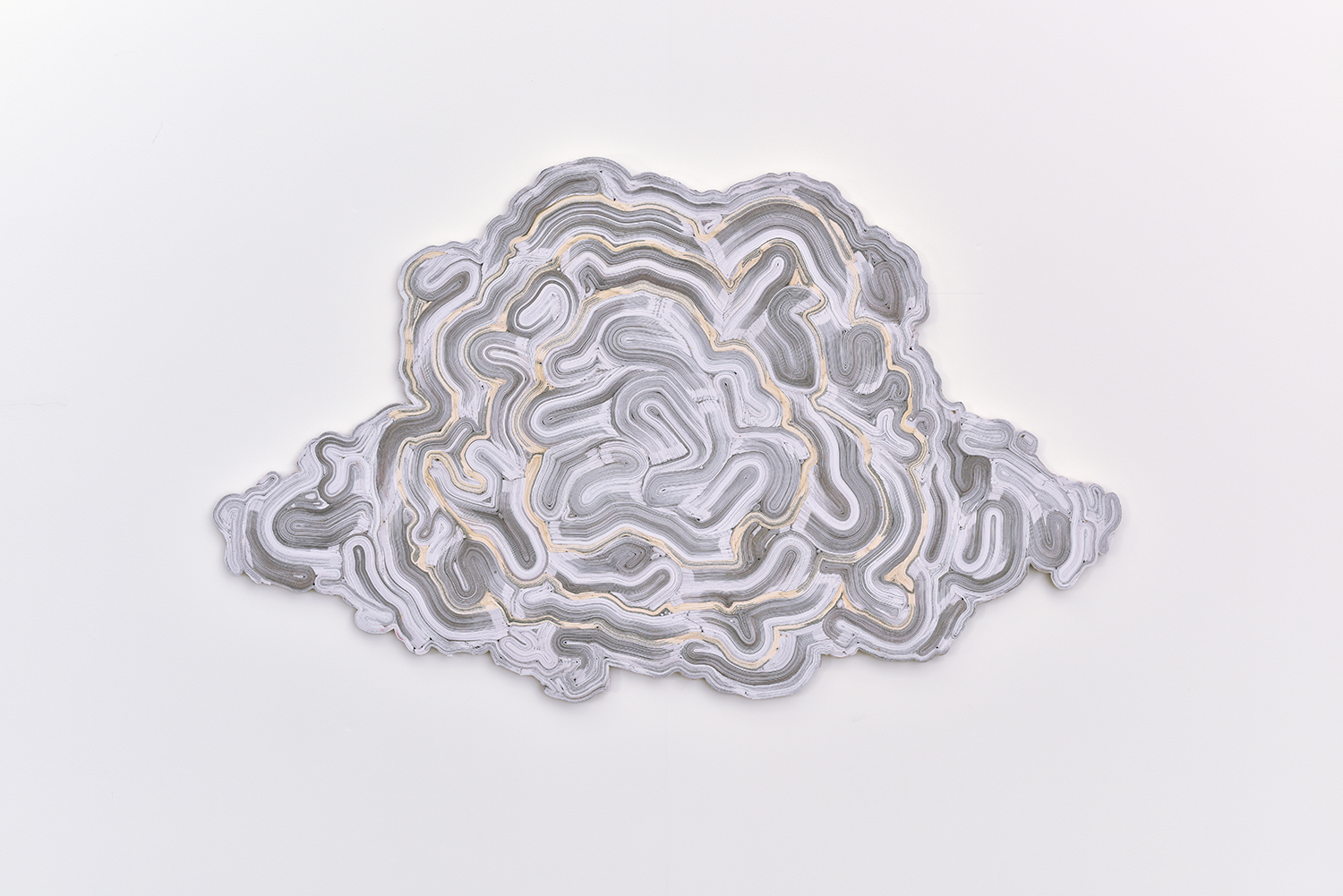 This collection piece I did first talk about in this Blog in 2015 and I do republish it to honor the opening of “Inside Out”, the show at Kunstmuseum Villa Zanders, Bergisch Gladbach together with Andreas My, starting 15. September 2018 until 6th of January in 2019 (www.villa-zanders.de). The original work can be also seen as part of the stunning presentation.

This book sculpture exemplifies in many ways what Jonathan Callans work tries to achieve: Using books and their context it builds on the influence of conceptual art, but the sculpture itself is an aesthetic object that is perceived with all senses, not only the beauty of a conceptual idea. Also, like other Artists from the New British Sculpture, he is obsessed with the finish of the final sculpture and tries to achieve a certain perfection in the work. The work in the end is no longer the book and about its content, something has been created that cannot be fully explained using words.

When we accept, that our words are limited to describe the work itself, the experience and this aesthetic impression, we should actually reduce our attempts to interpret the work further and further. It uses the context of the original books, both indeed medical works on “Anathesia” and a scientific book on “Veins of Aggression” as the title already suggests, also the title has a certain rhythm that links to the physical appearance and distribution of the object in space. It evokes maybe to psychological ideas on what aggression is, how it is manifested and how we treat it, maybe the medical way it is linked to Anathesia. This interpretion is rather subjective, but Callan uses the book in a time where information is everywhere and books have been devaluated. Books are no longer what drives power and society, Television and Internet with social media have taken away a lot of its influence. Books are no longer displayed by educated middle class to display their education and hereby foundation of social and economic success. Books were costly, one could only afford an encyclopedia if they were middle class.

Besides the context of the books and their former content, the books are being completely reworked. The books are formed, deformed, glued, connected, pressed and cut, cooked to pulp and at first, the books are not immediately identified as booksthey are an entirely new object, they have faded into something new. As a scultpure, the work creates new associations, experiences and also references, it maybe evoke the idea of a body 2D scan cut in modern radiology, a rather organic or amorph creature, a cut through bowels or a brain, a cell-like object; we have in the end no idea, we have no word for it what it really is – in human history we have tried to invent a word. But how futile it is – only if we have made the experience ourselves of seeing it, we can better understand what the “thing” is. And we are always limited to this problem, we cannot fully transport our conscious experience by information. Today, we are obsessed with the quantity of information, more and more is produced daily but it usually cannot go beyond what a screen can display. There is no real experience, no virtual reality comes close to a real experience so far.

Further the work also shows the problematic concept of data to information to knowledge. Not the real knowledge based on personal experiences is transported, only the information that can help to produce a new experience that is at least a kind of afterglow of the real thing. So what is consciousness, what is the experience of a moment? Why can we not put in words, not even modern science has found a way to describe an experience and consciousness in the present moment. We also cannot grasp what a moment is as our concept of time is relative. It is completely hidden in the dark, but it can be better experienced once we interact with the sculpture. In culture, how we have developed and civilized ourselves, the invention of books helped us to cross times – however, the book is limited in its abilities to describe it as well as images are limited to do that. Jonathan Callans work is a strong advocate of what sculpture can do and what neither images, paintings nor literary objects can achieve.

“Art with Veins of Aggression bound with Anathesia” is on a formal level a harmonious object – both sides mirror themselves, although not identical, they resemble each other. It appears to be a natural object as it does not attempt to be based on a human concept like perfect circles, it is rather Wabi-Sabi. In the 21st century, the book has become a filter for information, it stops the information overflow and tries to focus on an aspect man can grap. I provides context all the time in the amount we can process. Jonathan Callan as a contemporary artist however only could have used the book as a material in our time – the work would not have been possible in the 19th and the vast part of the 20th century where books were so valued – he also does not intend to destroy the books reputation or sacriledge. Books were always reprinted, pulped and edited again, this circle was always there, books were not meant to last forever. Only now, when we have started to devalue the book itself, when we find books that are sold by weight in kilograms on flea markets we are reminded that the books was valuable because it was the only form that we could afford to store information; today eletronic information is cheaper to be published, copied and distributed. But the limitations of it are still the same, propably we have already lost something because of the haptic quality of the book in exchange for something, that we still cannot judge is more meaningful or better for us as human beings. By electronic reading, the once valuable books have become objects, mass consumer product that we no longer consider as helpful as in the times where it was the only way how we tried to transport experiences, knowledge and information. Psychologist have also noted, that electronic reading or browsing is no longer comparable to what the brain did when it read – it is trying to find patterns, categorize and store somewhere. It is similiar to consumer goods, who are not required, but quickly stored and put away after one-time-use. We can see all this in such a work if we want to.