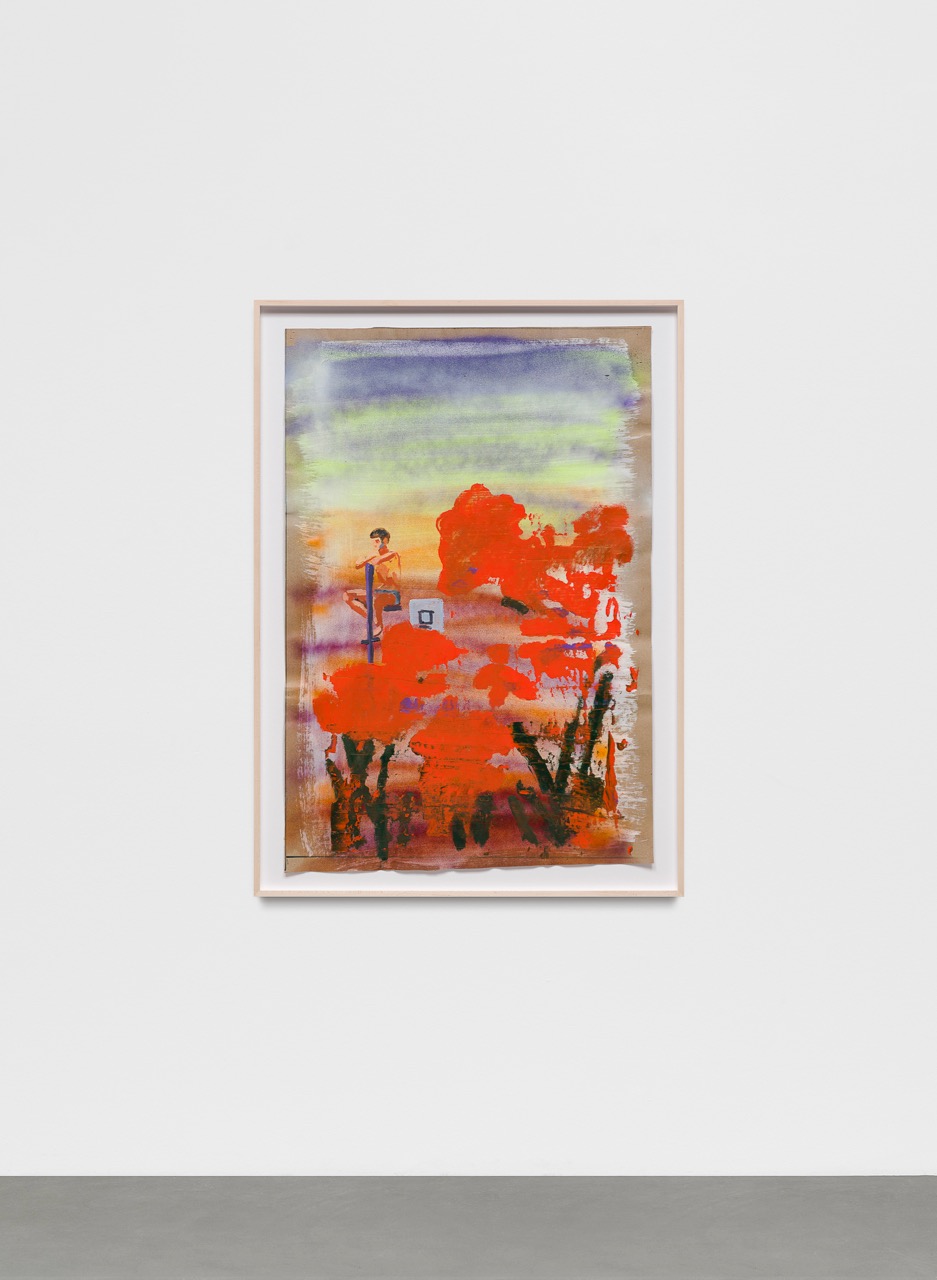 An obvious example of why Marius Bercea is one of the most iconic colourists of his generation is this mixed media work on paper. It obviously gains an enormous presence because of its intense and inorganic colouring, a beam of light in any situation it is placed. Despite some disadvantages a work on paper can have e.g. appearing shallow (especially if compared to Marius fine oil paintings on canvas, his main medium), this piece is able to outplay with all the advantages paper can have when colour is fulfilling its purpose. Using a rather dark, brownish paper (sand paper like, earlier paper works mostly on fine white paper), colours get a clear contrast to each other and luminate strongly. The sky is radiant, no natural colouring, sulphuric green. The painter achieves different layers as on his oil paintings by the use of different techniques and materials: Some water colour is applied by brush, there is also fixated spray and acrylic colour with the plants in the unfocussed foreground. The guard is done almost like on an impressionist painting, it appears effortless and is done with only a few strokes, however you can put every detail in it by your own imagination.

In the foreground the expressive strong red tones, somehow like clouds, it is unclear wether they are just there to round the colour palette and composition of if they are representing a formal object. We could imagine that this is a view typical to get with a depth of field like with an SLR. These flowerlike creatures allow the viewer to see through them to focus on the person placed on a pole, the person we could call “Guard” as the title proposes already. There is no obvious hint, what he is protecting or guarding. A basket as used in basketball is in the background. Is it in a game or a metaphor? He does not seem to be a referee who often view the game sitting on a high chair, also he is barely dressed. Likely the setting takes place close to sunny beach. It remains unclear what the guard actually watches and guards, does he watch us and keep an eye on us to protect from danger or does he guard us like prisoners that are not allowed to do what they may want to do. Very often in Berceas work there is a sensitive, dreamlike composed situation that has a mysterious meaning that we can interpret any way we like. Although we know this e.g. from movies like David Lynch, the situation is never darkish at first sight and is not using a dark palette. Often, Marius Berceas bases these dreams on his own memories, his youth, on artefacts he has seen or collected in magazines, coffee table books and from his frequent travels to California. Often the subject is placed either in his Romanian backyard in Cluj-Napoca, but this situation could be placed in California as well, maybe somewhere near Venice Beach or in a dream landscape that does not exist. You decide, all up to you. He wrote to me that being in California, he is fully able to achieve the view of an observer. This is different to his life in Cluj, where he has family, friends and intensive social relations that forge his thinking and indirectly painting. He is a person of responsibilty, a teacher (professor), father and friend to many. And of course he is political as you must be if you are educated and live in Romania, a country that has seen dusk and dawn in history often and is heading in an unclear direction today.

This is a work that does not mention him, there are larger oil works where he places himself in the background or more recently with a rather large portray of himself in the foreground (Frieze 2018), a tradition classical painters invented (Rembrandt often did this). The well rounded colour composition is formally absolutely convincing and a triumph of shining colours, it does only slightly emphasize the subject of the work. We can live with the piece also in a decorative manner, knowing no reliable interpretation of this situation, we only know by other works that it can present the view on a introverted, brooding person that has his own struggles with emotions. Of course one can always interpret the psychologically of the painter into the work, but the question is what this will help to experience the work – it is just a logical or rational concept build around a piece and you may loose the time to let it take affect on your own emotions and your own psychological understanding. In the end, the viewer responds to the work and this is what should matter, not to look through the piece ot understand the painter. There can be a longing for escape, for a dream place full of beauty. But it can also be mundane, your own distaste for modern society, mass consumption, strange leisure activities, futile undertakings, but also the beauty in everything. In many of his paintings, there is also an underlying pinch of fear – although the colouring is so strong and has “positive” expression, avoiding the black-white palette of other painters from Cluj, it is also possible that there is collapse, that the guard is not viewing after you, but a foundation of a terror regime. Although you would put this in context to Romania and securitate, we experience this in any human context – watching an advertisement can allude to the similiar fear (e.g. getting old or sick, being isolated and alone, etc.). We then want to fix it, change it, buy stuff, at least do something because we almost cannot stand the exposition to these feelings. We view the situation and can ask ourselves, wether we want to play an active role in life or indulge and be aware that everything can turn into an unfree society and we become a victim in a nightmare. Or just try to be present and experience a wonderful work of art – so let it be purely aesthetic, love the colouring and let the content be explained by your subconsciousness.

Marius Bercea is a painter from Cluj, Romania. He finds his subject matter in the clash of aesthetics within the urban environment, an interest stemming from the shift he witnessed as Romania transitioned from Communism into a free market economy. Bercea broadened his focus onto the convergence of ideologies the world over, reflecting these surreal situations through studies of architecture and topography together with an application of bold colour.

Bercea has been described as one of the strongest colourists of his generation. He applies colour with force: a flash of orange or a scrape of ochre butts against an energetic mix of vibrating vivid greens; a lick of sumptuous brown is delicately laced with a dappling of white. He embraces the dynamic between impact and restraint that is necessary to make a painting resonate. Fast-paced strokes are offset with steady washes and the consistency of his paint is varied; thin translucent areas are complemented by thick opaque mark making. At times buttery and fully suspended, at others sand-paper dry, his grounds are as interesting to examine close up as from a distance.

The artist’s ‘Transylfornia’ paintings are born out of his travels from his hometown of Cluj, through the rural landscape of California and into Los Angeles. A series of psychological and sensorially-rich encounters that weave through time, space and memory. With a pastiche of iconic motifs recognisable from both Romanian and American cultures, canvases depict landscapes of colour and concrete which oscillate between suggestions of utopia and dystopia. The topographical regions of Transylvania and California merge; the city of Cluj and its surrounding Carpathian mountains converge with sun-soaked environments, from the lonely Mojave desert to Hollywood’s hills and bright lights.
While socio-political references clearly influence Bercea’s practice, the artist presents himself as an emotional observer of the effects of the consumerist phenomenon. Often verging on the surreal, Bercea combines sublime visions of the natural world with the jarring electric lights and sprawling architecture of urban developments. Vibrant landscapes slip in and out of immediate focus as urban life is conveyed in a wash of dynamism and transience – fluctuating between the utopian and dystopian, between flux and stasis – thus blurring the boundaries between reality and imagination.

Marius Bercea received his MA from the University of Art and Design, in Cluj-Napoca in 2005, and currently works within Cluj’s Fabrica De Pensule (Paintbrush Factory), a multidisciplinary space with studios and exhibition galleries. In 2003 Marius Bercea was given an award by the Institute Superieur d’Architecture Saint-Luc, Belgium.

Bercea’s work is in several public and private collections, including the Hudson Valley Center for Contemporary Art, Peekskill and the ARKEN Museum of Modern Art, Skowej.