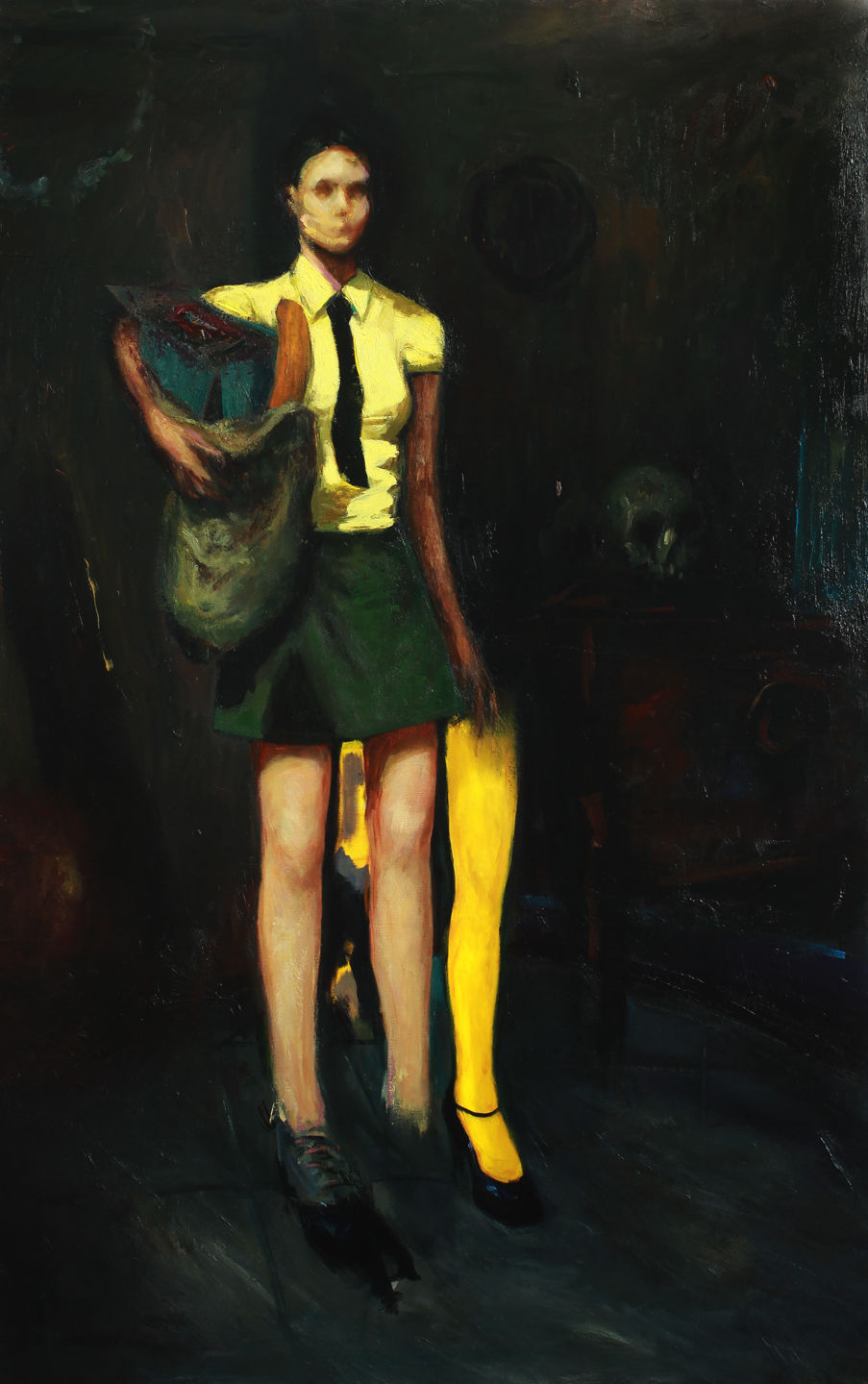 This oil painting may once be considered as a key work of Szabolcs Veres. He has repeated and changed this motive, worked over it on and on. At the end, this signal yellow woman leaves the viewer with many questions. The background is dark, obviously the context is not one of joy. On a cupboard on the right side one can see a death skull. An obvious sign for death, for eternity or as a classical symbol in oil paintings. Holbein used it, Claesz used it, Vanitas was a symbol for the limitation of life on earth, it was useful both in the enlightened world as well as in the metaphysical or religious world. You can also see it as a reference to the classic master painters of the past. Here in this work I believe that it is more important to see it as a reference to what this woman is about – she may be a part of the painters past, she may be even dead or part of a memory of somebody. Before the work was finished, the face was very clear, the lady wore glasses and appeared very stiff, even draconic to me. But this was mainly due to the edgy design of the glasses she wore. Veres later decided to blur the face, in fact this happened within minutes while I was visiting his studio in April 2016. It was a very fast and straight executed decision and it will be interesting to find out, what more is behind this woman. In her right arm, she carries a paper bag. The main object is a bit unclear, next to it seems to be a baguette – it carries a shape that resembles a penis. The yellow shirt is contrasted by the tie – she is dominant, she could be in a communist youth organization. She wears a green skirt, on the one side maybe trying to attract, but it is also very military in its appearance. Confusing is the look on the legs: There are three of them, also there is something which could be a forth, it is not clear what it is. While one on these legs is yellow-orange, that one wears a female shoe. The center one has none, not even a foot can be seen, maybe a club foot, satans foot? The left leg then is wearing a functional shoe, maybe a trecking shoe to hike. It could be, that this is not her leg even, maybe it is a male leg. In all of this, there is confusion about the sexuality and its key symbols. It is not clear, wether we see a dominating woman or if that woman is dominated by an organization, an ideology. The baguette gives us sexual symbol, it could be that this person had a love-hate relationship with somebody that had a strong sexual underpinning. Her hands are no gentle hands, they could be claws. The third leg has no connection to the body. Is it deferred, time-delayed in the appearance as on a film negative? The title gives not much of a clue, the three leged woman is there and she could already be a part of our memory. Szabolcs Veres starts with the traditional notion of the portrait and proceeds to distort it into something disturbing in the manner of Bacon and Ghenie, however, this is clearly his personal style now that can be rooted back as much to traditional oil portraits as to psychological distortion and awareness. This above image was featured in Christies report on Adrian Ghenie and the paint brush factory in Cluj, you can see the original layout of the painting and how much it changed to its final form.

Veres Szabolcs employs methods of classical painting, which he breaks up during the painting process, intuitively giving the picture a disturbing and supercharged meaning that is also reflected in the format of the works.
A certain mystical-existential depth and darkness lies in his painting that nevertheless embraces a vast and complex color repertoire.