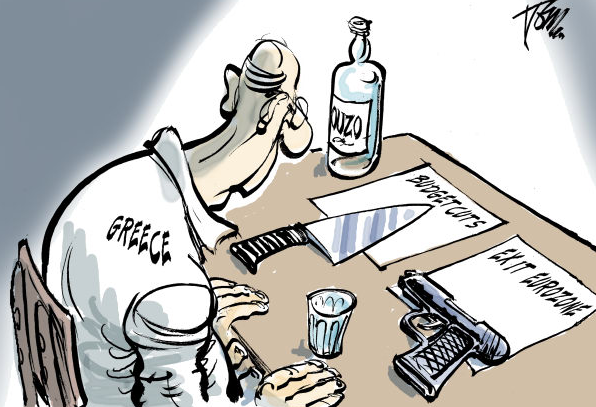 Greece is causing problems, this is the common perception for german taxpayer. While guaranteeing bail-outs and helping to stall interest payments, Greece populists do not stop to attack Germans politicians and open up new battlefields. Populism in Greece is something northern europeans are unable to imagine, its noise and screaming attacks their well-being continuously. Current demand for reparations for Nazi crimes in the 2nd world war convey a simple message to the Greeks: “It’s Germany that is putting force upon us, we cannot cope with it and now we have to see whether they have treated us fairly in the past. If the answer is no, Greece should no longer play fairly to the rules.”

However justified these claims are, they are misleading in the current debate and an argument of the past, that is little help for Greece now. The debate that is taking place now is, that the Troika or “Institutions” how they want to call it now, is not respecting democratic votes and insists upon measures that are socially irresponsible. While it is true that Troika is not taking action on completely democratic terms, it is still legally bound to the mandate of the european comission, the central bank and the International Monetary fund. It clearly is authorized by the majority of Euro Group members to continue this way. And naturally these institutions have no legitimation, if they take action that is not authorized by its members.

That the former greek policies of lethargy, kleptocracy and inefficiency are now isolated not only by the majority of parliaments, but by a clear mandate of the Troika, is certainly painful for Greece. And it is true, it should be debated whether the actions taken are helpful to restore trust in the greek system and enable growth. And as long as there is no constructive debate, the greek sirens will scream to the pain of audience. But there should be no hope on the Greek end, that the general direction will be kept and only slight modifications are thinkable. This is not because of political struggle in the boulevard, but the impact it has on the Euro-Dollar conversion rate. And this psychologically dangerous implication has had an effect, the competitiveness of the Euro area will not increase in the longterm if this continues. Not even the cheap oil prices can now have an effect for growth and avoid deflation.

Eventually, this is to be feared, the populists in Greece will continue to scream even if they have agreed on a compromise. This is because a lot of the measures that are taken are new to the greek population and will feel painful. E.G. Greeks could not only count on a flawed tax examination, but also they did not have to pay any tax on real estate. They now have to and also have to pay it on time, irrespective whether they are already broke or not. What is harmful to some, is justified for the majority in order to make the system work. Also, it is clear that Greece cannot continue to have such a ineffective but huge goverment apparatus. The percentage of public officials is unheard of and cannot continue. How, if not by the force of a Troika, can a government reduce the goverment staff w/o moaning officials? Even if Siriza, the populistic goverment, finally agrees upon reducing their public staff, they certainly will not agree to a silent approach and continue the lament. It is painful, but it must be done, otherwise the Eurogroup cannot justify a policy that has taken place in the Baltic States, Slovenia, Ireland, Spain and Portugal before. It is not, because something unfair is being repeated and it is wrong, it is because it has worked to restore faith and growth potential.

Unfortunately the Euro Group cannot deal with Greece any longer as a lazy employee and put force upon him only. It is true, the noise is unbearable and while there should be some force upon Siriza to be more silent, some points will have to be accepted so that the actions taken are not socially totally irresponsible. So far, Troika has not said that they would totally ignore this, it certainly was no hostage crisis where the hostage was strangled by the policemen. To prove and accompany Troika publicly in the measures taken would at least to some extent give it a public mandate in what is is doing. It is quite clear that the very strong stances on cost cutting are not agreed if there is not a growth initiative to create an alternative and future option.

That Greek is causing problems however has already strongly promoted voice who claim that a Grexit would be the best option from a financial point of view. The argument is, that Greece will never be able to repay its debt, even not in 30 years. Besides this pessimistic point that has some justification, it is the doubt that Greece will ever be cost competitive considering strongly growing neighbour countries (Romania, Bulgaria and especially Turkey). It is true, there is doubt whether Greece will improve on its own. However it makes no sense to believe, that the bureaucracy involved of the 390 million members of the EU cannot help their 10 Million Greece neighbours in building an effective state and also giving loans and creating growth programs, that will help the Greek to “reset” their economy. Tourism and agriculture can always be competitive in certain areas, even at current prices. That there is little industry to see and that there propably won’t be any shipping yards in the future is true, but this was already part of the past decades ago, when the ambitious asian shipyards took over the business not only in Europe, but worldwide. Second, the question is what will be the future if Greece deliberately exits the Euro (which they cannot be forced to legally). The conversion rate will slump, some say to 30% of the current conversion rate, some say 50%. It cannot be projected which is dangerous and risky. Risky as Greece will at all cost stay a member of the european union and if energy, consumer products and investments cannot be imported, this might throw Greece into a state of chaos. They olive oil and tourism will become cheaper, but at what cost for the Greeks? These considerations cannot be ignored since there must be solidarity between european countries, otherwise all lending commitments are worthless as well. The EU cannot agree to a experiment that is unforeseeable, even if the financial markets won’t take a big hit now. That Banks or Insurances have written off Greece in their balance sheets does not mean, that Greece will not cause conflicts in future. It is true what Varoufakis said, there is no option w/o a big price and certainly the question is, why states not earlier stopped the credit flow into Greece. But they cannot simply reverse it now and most likely, they never could. So, a Grexit will not necessarily become a cheap option, but it has more risk of economic downturn.

Some argue, especially the german leftwings, that there should have been a debt cut first: Those are irresponsible, who donate more debt to a country that defects with the debt it already has. It should go in insolvency and debt would be cut in this process. Well, this is economic bullshit at its best. First, there is nothing like an insolvency for a state. The bigger problem is, we have one currency area. So if that country that mismanages the most gets a debt cut, this is like a subsidy to the poor. Leftwings may love the idea, but this is not how currencies work. If the Maastricht Treaty is further perforated, the value of the Euro will tumble even quicker. The current rate of 1,05 € per Dollar is already to low. This is not a problem some say, when a new gold Apple watch now costs 20.000 € than 18.000 as before. It is a damn problem if you have to pay for petrol. Even the biggest bigot must have understood at the gas station, that although the price of oil is at a record low, petrol is getting more expensive now. So we cannot ignore the value of the Euro as a whole and of course the reputation of a currency is created by the economic policies and actions taken in the states. It is to assume right now, that the current boost of shares is too a certain extend only explainable because of the currency weakness of the Euro: Investments in US-friendly companies become cheaper every day and boost the share prices, just look at the car industry values such as BMW and Daimler. It is almost insane, how much money flows into these moderately growing companies. If we would talk about a young industry, I’d agree with you that the expected payback is worth taking the risk, but this right now must be alarming to all macro economists.

There is little option for Greece now: the cost cuts will have to be made, the efficiency of the greek government needs to be improved and there has to be some growth initiatives especially in Greece, not to forget some actions take for those who are stuck in poverty. But the noise will not help in the european project, it neither helps the Greeks nor those who want to force a Grexit in the northern countries. This will take its time, especially to restore trust of foreign investors, who are in shock of the current state of the crisis. The Chinese were at least ready to buy some of the crown jewels (ports) as were the Germans (Fraport for Airports), it is a pitty they need to be sold, but this is the way out of the crisis that has to be gone. And last but not least, once we are on a way that creates confidence, we have to go the last step and convert the debts. But this is the last step, not the first, otherwise the hypernervous and anxious financial markets will never calm down. This is a fact, even proud (or in other words: bullheaded) Greeks will have to accept. Or the voices asking for a Grexit will never turn silent. And that will further weaken the already low Euro, not for the good for all Euro Group members.

My recommendation: Keep some Dollars and especially dollar based shares – they will become horribly expensive in the next weeks. Very likely this means for share price inflation: Let it run and do not change a winning horse. Cash positions, real estate and especially government bonds will be a nightmare.