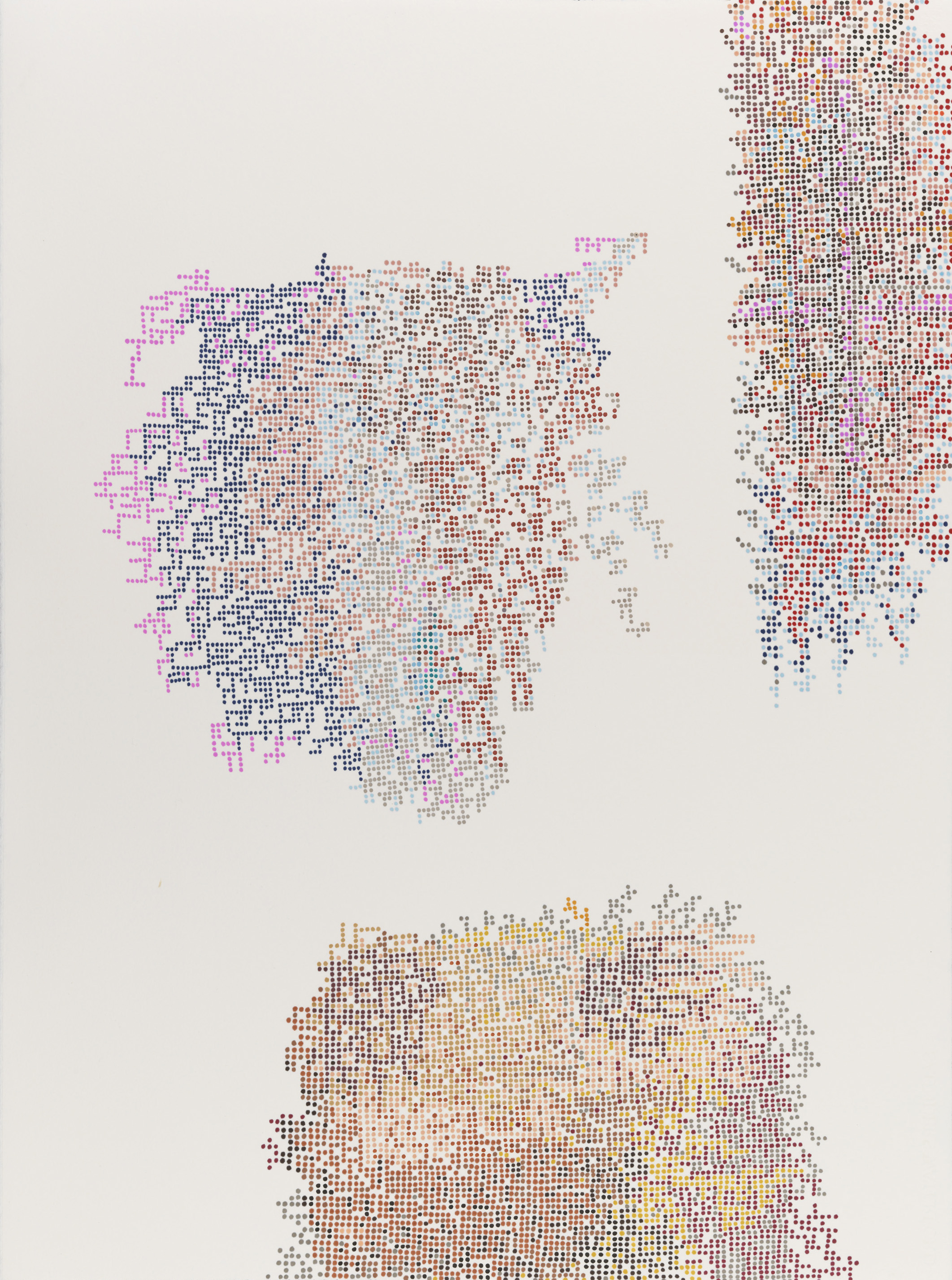 Proudly I would like to present another artist recently added to my modest collection: Károly Keserü. To start the collection of this contemporary minimalist I have aquired the above work “Untitled” (1601133) via Patrick Heide Contemporary Art, London. It is a quite large piece for a drawing and untypical for the other works many people know of him (very often on Paper in Din A4 scale). Karoly has created paintings in Acrylic as well, however this work on paper is to me quite special, organic and almost coral-hermatype shape and patterns that attracted me next to the obviously quite pleasant colouring. It appears not to be irritating, rather comforting when looking at it. It is reduced, abstract and minmalistic in its expression, zen-like and crafted with painstaking details. It must have been quite an obsessive process to create the piece. It was part of the latest presentation of the artist called “bitter”. This is obviously not the most attractive title for a superficial type of sales marketing, but it is a important emotion we can all share from time to time and the people really interested in art want to see all emotions on canvas, certainly not just “the funny ones”.”Karoly Kesserü @ Patrick Heide“. To me the works at first seem be more of a craft masterpiece, although it is obviously intellectual. One is attracted by the precision and micro details of the works.

But there is obviously more that differentiates the works from pure craft to fine contemporary art. Even mathematical patterns and shapes as know from science can be spiritual or metaphysical. Mathematics works with similar processes as does music, they can be deeply intertwined, one appears to be highly emotional, but is as well structured and logic if you go into detail. My first link to the dots was as to many almost binary: Look, colourful Punch Cards! Organic Structures. Chaos Theory. Self Organization. Mathematics. Lines. Architecture. But there is more than mathematical associations. I am really happy to have continued to look at the variety of works he is producing as there are so many surprisingly creative, amusing and rich metaphors, associations – even ideas on mind, spiritual or a John Cage kind of philosophy – maybe even religious. They appear to be done by machine like precision, but it is impossible to be perfect for a human being when it produces something that is that accurate as this. Every dot has nearly the same intensity. Keserüs works are insanely precise works, the is no drafting recognizable, the paper appears to be untouched. It must have been done in incredible concentration, patience and precision – almost a maniac attempt to be close to perfection. However, you would still not necessarily expect it to be done by a machine, it is very believable that it is and was a manual process and it certainly was. Every dot or line, whether made by ink or graphit, is carefully pressed on paper.

Where as binary thinking in the most simple 0 to 1 form creates thinking that is dualistic, black and white, this piece is not binary, obviously closer to the real thing, to nature and creation itself: Every dot can take multiple colours. Every dot is linked to another. Connecting the dots is obvious in a multipolar, network associated world. However, nature is even more complex and not only dots are connected, every bloody dot is different. And therefore, effects in networks or connections in machines are nowwhere close to what e.g. human interactions, interactions between cells or other viewpoints in this pilosophy are. On the other hand, we normalize and reduce this idea of machine made perfection: When a machine produces an almost perfect line or dot, this is an illusion. No machine is so precise that it can produce something without irregularities. It is just a matter of how deep you zoom in until you see differences. We are not building things on an atomar level usually and even then the question is, if smaller units such as Quarks are regular then or not. The closer we get to detais, the perfect dot always becomes imperfect. Even the atom as the smallest entity has irregularities. Nature is different to what we expect it to be, it is not mathematically perfect, but always “has a small twist”. And since we are part of the creation, our work can be seen only and always as nearly perfect if we zoom out – the further away, the more perfect or closer to the idea of perfection certain things become. And the bigger the illusion. Not necessarily perfection makes any sense to creation as obviously the first institution to abolish perfection was nature itself: As there is not one single perfect creation, nature prefered evolution, it is changing its shape continuously to adapt to always changing enviroments. Obviously and here the logic loop is closing, the artists works one by one are an evolution.

“In his search for a balance between the physical and metaphysical, between system and chance, Károly Keserü (b. 1962, Budapest, HU) draws inspiration from Eastern and Western philosophy, folk art, as well as music. His paintings and drawings explore and playfully question the legacy of Modernism and Post-Modernism in the digital age, in a creative practice that is both experimental and transformative.

Minute dots turn into coloured swarms breaking free from an imperceptible grid, while nearly invisible lines run across the sheets of paper, like rivers seen from a bird’s eye perspective. With a surprising economy of means, lines and circles, as well as a refined palette, Keserü has developed a unique and intensely rich visual vocabulary through which the very nature of our being is laid bare. Line after line, dot next to dot, Keserü carefully creates his images, combining repetitive patterns with forms built by chance, in a constant dialogue between structure and freedom. Repetition can often be seen as limiting, yet it can also function as a catalyst for change, for transformation and rebirth: in Keserü’s works no dot is identical to the next, and the lines are drawn freehand, allowing for cracks to emerge, for light to shine through the layers of ink. It is in this twilight zone where we can finally see what we often unknowingly feel – the infinite and subtle variations taking place under the surface of our fixed habits and recurring thoughts.

Keserü’s compositions often appear as ethereal, mathematically precise images that challenge their own materiality. Nevertheless, the painstaking and labour-intensive drawing process deeply roots these works in a physical realm. In this process, abstraction is, quite literally, pinpointed down, and the paper or backing fabric both guide and set the artist’s hand free. Ultimately, it is through this interplay of repetitive structures and accidental forms, of visual silence and sound, that the fabric of life is quietly woven for us to see and hear.

Károly Keserü was born in Budapest, Hungary, in 1962. The exhibition takes its title from the artist’s last name, Keserü, meaning bitter in Hungarian. Although this particular taste is completely unrelated to the body of works exhibited, it does have a link with the artist’s biography, since he used the name Karl Bitter as his alterego in the past. Keserü’s has widely exhibited in London, Australia and Hungary since 1993. His work is part of important public collections in the UK, Germany and the USA and private collections throughout Europe, USA and Australia.